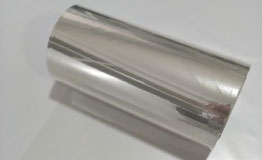 The dielectric films, depending on the desired dielectric strength, are drawn in a special process to an extremely thin thickness, and are then provided with electrodes. The electrodes of film capacitors may be metalized aluminum or zinc applied directly to the surface of the plastic film, or a separate metallic foil. Two of these conductive layers are wound into a cylinder shaped winding, usually flattened to reduce mounting space requirements on a printed circuit board, or layered as multiple single layers stacked together, to form a capacitor body. Film capacitors, together with ceramic capacitors and electrolytic capacitors, are the most common capacitor types for use in electronic equipment, and are used in many AC and DC microelectronics and electronics circuits. Our products as below： As below is Double Side Type:

As below is Single Side Type:

have nice uniformity, resistance to elevated temperatures. Application: for outdoor machine or the machine need to work in the high temperature equipment, like solar energy.

The ability of product ： The Introduction of Film Capacitor >Film/foil capacitors or metal foil capacitors are made with two plastic films as the dielectric. Each is layered with a thin metal foil, usually aluminum, as the electrodes. Advantages of this construction type are easy electrical connection to the metal foil electrodes, and its ability to handle high current surges.

>Metallized film capacitors are made of two metallized films with plastic film as the dielectric. A very thin (~ 0.03 µm[2]) vacuum-deposited aluminum metallization is applied to one or both sides to serve as electrodes. This configuration can have "self-healing" properties, in that dielectric breakdowns or short circuits between the electrodes do not necessarily lead to the destruction of the component. With this basic design, it is possible to make high quality products such as "zero defect" capacitors and to produce wound capacitors with larger capacitance values (up to 100 µF and larger) in smaller cases (high volumetric efficiency) compared to film/foil construction. However, a disadvantage of metallized construction is its limited current surge rating.

A key advantage of modern film capacitor internal construction is direct contact to the electrodes on both ends of the winding. This contact keeps all current paths to the entire electrode very short. The setup behaves like a large number of individual capacitors connected in parallel, thus reducing the internal ohmic losses (ESR) and the parasitic inductance (ESL). The inherent geometry of film capacitor structure results in very low ohmic losses and a very low parasitic inductance, which makes them especially suitable for applications with very high surge currents (snubbers) and for AC power applications, or for applications at higher frequencies.

Unique mechanical properties of plastic and paper films in some special configurations allow them to be used in capacitors of very large dimensions. The larger film capacitors are used as power capacitors in electrical power installations and plants, capable of withstanding very high power or very high applied voltages. The dielectric strength of these capacitors can reach into the four-digit voltage range.

The Introduction of Film Capacitor is from：//en.wikipedia.org/wiki/Film_capacitor